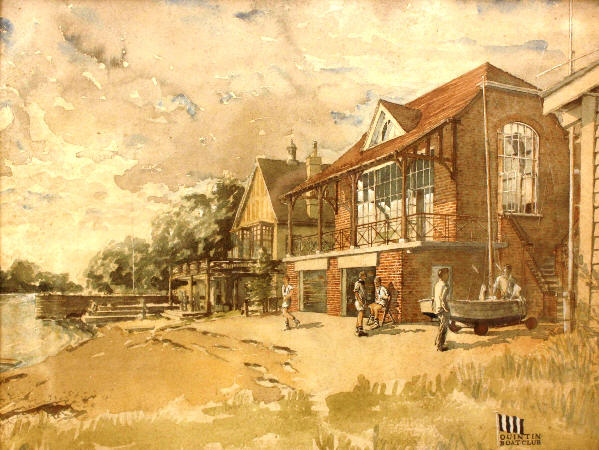 This watercolour is now in the custody of the River and Rowing Museum at Henley. We have dated the scene depicted as between 1951 and 1961 and so have placed this reproduction in the 1950s section of our gallery. Francis Brown recalls "I am certain that this was the watercolour I was given in about 1964 and eventually I gave it to Tom Peters - it needed framing and I wanted to clear out things before moving house. Strangely the other side of the painting had a watercolour of a Georgian drawing room. I cannot recall exactly who gave it to me but someone in the car park wanted to get rid of it and I took it thinking I would frame it and give to the club. Money was short so I never got round to framing it. I thought it was a better painting than Bean's etching of the club which I have. I kept it for about 2 years until I moved. There was a dinghy as pictured which, when I first was a member in 1956/7, was sometimes sailed.".