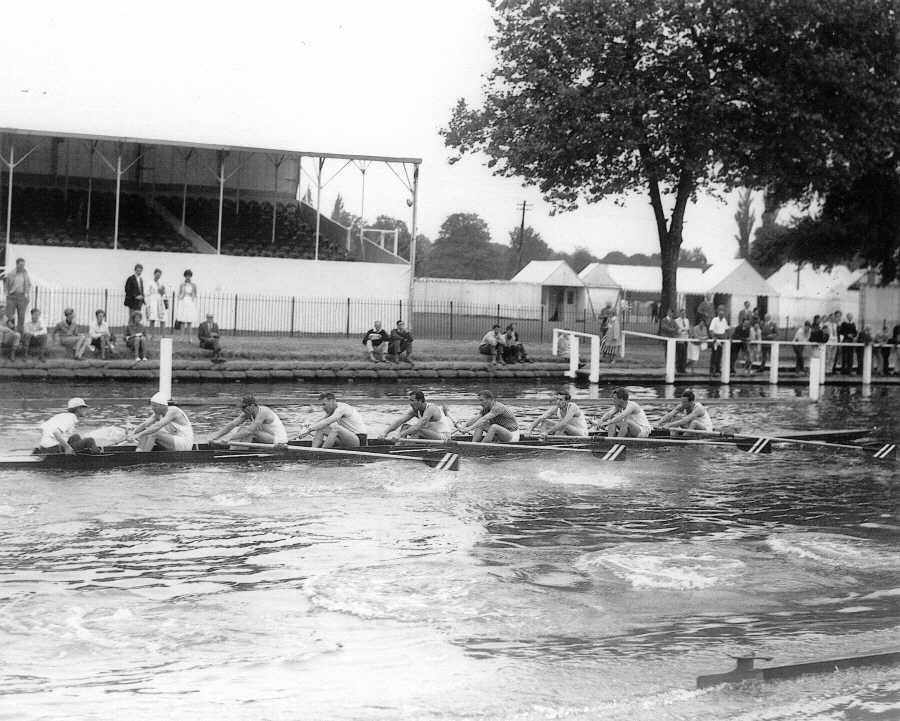 Quintin in practice for the Thames Cup, Henley Royal Regatta, 1962

Lionel Bailey reminisces, "The back story to this picture is that the crew arrived at Henley as a co-favourite for the Thames Cup that year as they had swept the board at this event at both Reading and Marlow in the weeks preceeding. The other outstanding English crew that year was National Provincial Bank who had opted to race and win the Grand at those same two regattas. Come Henley the club's fortunes began to wane and after a tight race on the Wednesday (against Notts & Union ed.), they went out by 2/3 of a length to a London VIII they'd trounced handsomely at those aforementioned up-river regattas. Needless to say Nat Pro sailed through the event and won the final by 3 lengths." Lionel goes on, "It would be interesting to hear Francis' take on the regatta but I can remember it reasonably well as, although I was not a member of the club yet, I was a schoolmate of Pat Barry. I remember him remarking that Lou felt the crew had not rowed to orders and that his father and Bob Slade never saw eye to eye again."

A footnote from Cedric Nowell: "Bob Slade had come into the crew after the drowning at Easter of Bob Finlayson. Brian Welch had been the stroke until then. Rowing behind Bob I remember that he always tended to drive the rate higher and the stroke got shorter when times got hard. That is why Lou Barry was upset."