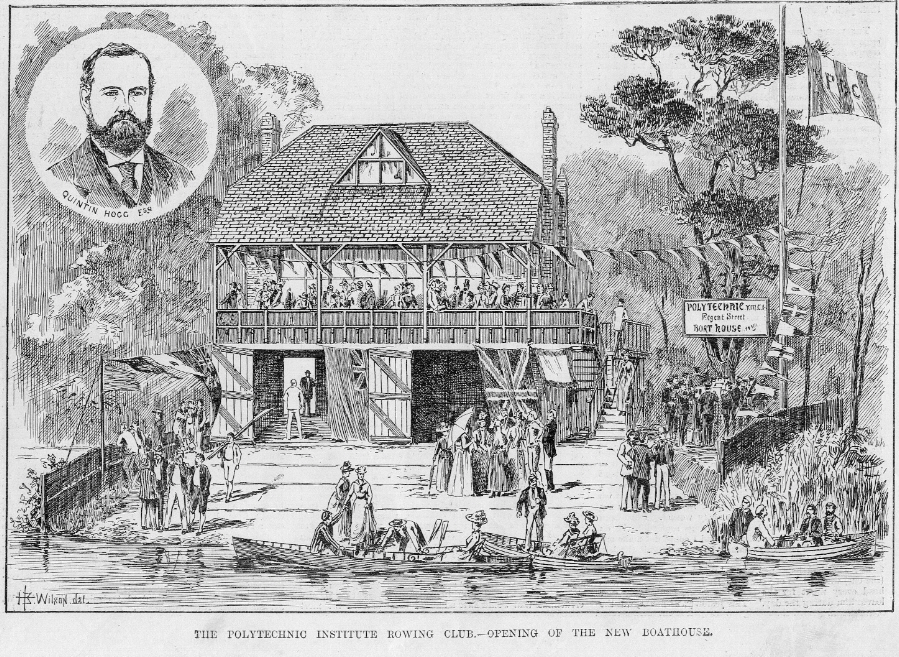 The opening of the Polytechnic Boathouse, Saturday, 25th August 1888

The drawing above was published in the Illustrated Sporting and Dramatic News on 1st September 1888 (newspaper cutting courtesy of Malcolm Cook).

The following report appeared in The Times of Monday 27 August 1888:

"In connexion with the athletic club which is carried on in conjunction with the Polytechnic Young Men's Christian Institute, a boathouse for the use of the rowing members was formally declared open on Saturday afternoon by the Rev. C. J. Bristowe, who was stroke in the Cambridge boat of the University race of 1887, in the presence of a numerous company. The boathouse, which is built in the chalet style, with a covered verandah, cost £800, and is the gift of Mr. Quintin Hogg, the president, who has, in addition, stocked it with a good selection of boats, including four eights, five fours, four sculling gigs, and two tub fours. The house is situated on the banks of the river at Chiswick, adjoining the Ibis, on the Grove-park estate, and it contains, in addition to good accommodation for boats, a club room, dressing rooms, and lavatories, and has a frontage of 60ft. Mr. Quintin Hogg was present during the opening ceremony, and the company awarded him three hearty cheers. Boat racing was subsequently indulged in, and the proceedings were enlivened by a selection of music performed by the military band of the institute."