Our news archives prior to 2007 are not always as detailed as at later dates. In many cases the dates of the events are missing from our records.

Quintin women race at their first ever Henley, QBC goes to Aiguebelette, John Peter's squad rack up the VIIIs wins 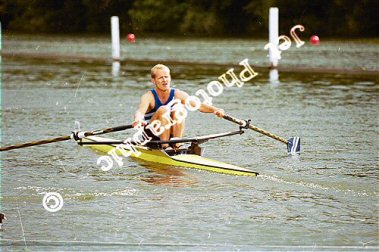 Fordy wins Novice Singles at Docklands Regatta but falls in at Kew! 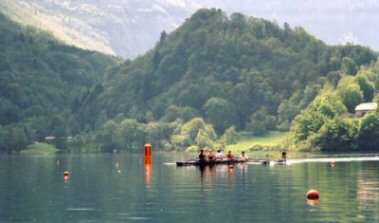 Start as you mean to go on - Night 1 - The Quintin drink the hotel bar dry (of beer). Luckily the next night everyone is too dead to drink late...

Dave Ford was striving for the mileage record each day in his single, determined to get a whole winter's training into one week.

Bucket Davies, the man of a thousand nicknames, picked up a new one in Aiguebelette. With the arrival of Kaiser Bill the intensity of the workload stepped up. One particularly nasty outing on the Thursday lunchtime involved three 2000m pieces. The following evening Bucket, or should we say "Le 2k" decided a repeat outing was the most beneficial approach to the day before the regatta. Chief Coach Almand realized this was the beer talking and looked forward to the inevitable climb-down the next day. Mutterings of "tapering for the race" were heard emanating from the bows later on on the Friday.

Tim Mitchell learnt to scull and shot some particularly excruciating video footage of the 1st VIII proving that the Reebok Belly has indeed got us!

Whilst on camp Quintin BC learnt some important life lessons, namely not to laugh at others' expense. At a bar in Chambery Pete Meaney, in his desparation to reach his beer (not his straw), upended half a table of beers on the Captain's lap. Willy Almand thought this the funniest thing ever only to find himself what can only be described as a foaming beer fountain a moment later. The fact that he was halfway through one of a series of lectures on "Euro-muppets" had nothing to do with the multi-lingual waiter's sudden clumsiness. Indeed the dexterity with which he ensured that the entire contents of the next round ended up on Willy's head smacked of precision placement.

Russell FT Williams (Fine Tune) was in seventh heaven performing steady state rigging workshops. The fact that the VIII's blades had been geared harder for the Head than last summer's regatta season passed by without too much comment from fellow crew members.

Kit formed a dominant theme on the camp as it does on any training camp. The full range came out for early morning mist recognition through to full-on tanning gear.

With the benefit of hindsight the Captain decided a certain brand of Asset Management was visibly not working in the one-piece department and resolved never to wear that kit again. The mapping of the incidence of baggy t-shirts being worn to the appearance of video cameras in the launch proved quite staggeringly close after that one showing.

Though no laptimes for the circuit around tha lake were taken Hilary Cook, Richard White and TwicksChicks Acolyte Mark Chatwin must have got it down to a tee. The number of practice laps looking for the Crewline kit store would have put a F1 team to shame. Unfortunately even when added to their on-water mileages they failed to beat David Ford's daily records.

Roy The Bucket Davies excelled himself. Known for his legendary appreciation of customer services abroad (Specialist subject : Berlin waiters) the heaviest bow man on the planet had to concede that there was more food and good service than even he could raise an argument over. Indeed over the whole week he failed to annoy a single waitress.

A 2 beer limit was imposed by Chief Coach Willy Almand. Opinion is divided as to whether this was imposed as a test of mental strength and commitment, an attempt to curtail the excessive amount of rubbish being spoken or the start of a much needed crew diet. One thing is for sure though - the shandies consumed by Duncan Donuts must have been very weak to keep him within the 2 beer limit. 10 out of 10 for mental agility..

A typical day on the camp

After-dinner activities centred around talking b****cks. Kevin O'Shea (The Loft) gave a particularly good run-down on modern rowing and rowers needs to know ratings, times etc. No one dared suggest that that was the cox's job and that the info was all on the cox-box as we were deemed to be soft. Kaiser Will concurred with Lofty's new style of command "Just ****ing pull". The speech was beginning to gain support until the vexed Irish question re-surfaced. Kevin's line that "My Father was Irish and my Dad was..." alerted us all to the fact that we'd drunk far too much that night. The after-dinner b****cks was halted for another night.

Mouthy Chatwin timing his training plan around the French Lwt Girls Doubles. Indeed his whole stretching routine was based around the positioning of young women.

We were particularly upset that Mark was distracted by the French chicks as the Junior Lonergans had joined up with the Quintin camp to give young Chatwin someone to play with.

A report on a Quintin trip abroad is not the same without the antics of Richard Lonergan being recorded. This time his wife had packed him off with Toby and Jake to ensure they looked after their father. Despite Toby's' wish to train Richard wanted to go swimming / walking / in fact anything other than rowing. The ultimate moment came when he missed the Veteran Coxed Fours race on the Saturday - the clock in his caravan had been right twice a day all week... (Work it out Chatwin).

Jake "Stanley Matthews" Lonergan, he of the unfeasibly large one-piece, entertained us all practicing his winning rostrum speech. In his single sculls race Jake impressively took one of the locals off the start. Watched by the Quintin he put on an amazing spurt at 500m gone when shouted at by his father and the ranks of the Quintin. Driving along to the finish he then had to put on another great spurt at the finish when we cheered him on there. Crossing the finish line bubbles the proud father's comments... "Good, the little bugger will be knackered now."

Great Quotes of the Week

One way to totally destroy a piece is to get the crew to laugh. Let us set the scene - the Women's four have the Captain coaching them from the cox's seat. They are pushing on in a 2k piece. He has even invented a crew that they are pushing against an imaginary crew. Entering the last 500m he pitches them a canvas up - perfect. Approaching the last 250m the excitement builds, the imaginary crew is being dropped. The words form in his mind: "Push On. I want a good margin. Push out that winning verdict" Unfortunately what comes out is : "Push On - I want a good virgin." The crew crack up; the Captain blushes; the last 250m is destroyed.

One of the promised treats on the trip was a wine tasting of the region. As we waited in the quiet mountain setting for our guide no one had anticipated the Master of Wine would be so closely associated with the cast of the French version of Deliverance....The cars wound their way up the precipitous route to a rural vineyard, waved at by weird mountain-dwelling locals. The wines themselves, well they're going to be drunk at a Savoie Wine evening back at the club.

The girls' four, fresh from their victory at Chiswick Amateur Regatta, spent almost as much time checking out the French Lwt Men's Squad as they did experimenting with the local wines. Nina thrilled us all with a repertoire of descriptions that Jilly Goolden would blush at. This presumably rendered her ineligible for the Captain's quest.

Another favourite was the game of Moustachio sayings. One game went three complete rounds without repetition or hesitation. On the long trip back this descended into a 3am discussion over postcodes and the exact order of tube stops on the Northern Line showing that brains had truly cracked under the heat and the mileage. Most of the crew are back to normal now and the nightmares over the Postcodes argument have subsided for Fordy.

13th overall for Nico Dalton at the Indoor Rowing Championships

Results of the Quintin Sculling Head

Chatwin wins the Phil Read Prize and Nico gets the Iron Man Award.

Roy Davies wins at Staines in the morning and at Bewdley late afternoon. And he's still the largest (lardiest = ed?) bow man in the country.Fordy picks up his qualifying Novice win taking home 3 quart lidded tankards from Bewdley weekend. He is now concentrating on the Mixed Double for Stourport International.

Mark Chatwin and Nina White pick up the Senior 1 Mixed Doubles Trophy at Bewdley - which is hardly surprising seeing as they were the only Diamond Qualifier / Henley winning combination. Nina has now taken the cotton wool out of her ears and will be resuming normal training shortly...

Quintin win Senior 2 VIIIs in the fastest time of the day at Kingston Amateur Regatta on a pleasant sunny Sunday afternoon.

A quick shuffle of crew orders and a hasty Lucozade to sweep away the Head hangovers saw Quintin boat 4 crews for The Vets Head. The Bucket rowed again in Quintin 1 whilst Willy Almand, John Peters and Richard Lonnergan added to the years in Quintin 2 to make a very fast C VIII.

Big Frank Webb grabbed the younger vets from John Peter's squad. They also managed to nab some subs from Twickenham 2 who foolishly admitted to being of the correct tender age whilst Nico Dalton (barely awake back from skiing) jumped in for a pleasurable slog against the wicked chop of the Tideway.

The Vice-Presidents / Barflies bundled together to make up a D VIII.

Final positions from the Vets' Head:

Quintin had five crews racing. Following all the close rcecent tussles there was little surprise that only 3 seconds separated Quintin 1 - the crew that normally races as an VIII - from Quintin 2 - made up of the quad and a veteran scullers' four.

Getting 2 crews in the top 100 was a great result for Quintin but should not overlook the results of Quintin 4 and 5 - also separated by merely 3 seconds!

This year we also had a guest appearance by Lincoln College (Oxford) who rowed as Quintin 3 in their first ever race in the main Eights Head.

The two Quintin elite VIIIs had their timed showdown. The lighter VIII made up of this year's quad and a veteran coxless four were at a disadvantage in the rough conditions allowing the Thames Cup VIII to regain some pride and pip the Elite pennant by 8 seconds.

Quintin's Women's VIII came 86th in the Women's Head, beating a number of the crews who had beaten them at Quintin Head. This was a fabulous result and bodes well for the summer.

Lincoln College Oxford - our recent visitors made 3 bumps in Torpids. Twickenham Women's 1st VIII were 12th in the Women's Head of the River.

Quintin Eights Head ran over a course from The Pink House to Kew Road Bridge. Given the debacle of Ibis Head a good time was had by all and the PLA got a safe event on their cards. Quintin 1 won the overall event.

The Plum Puddings resulted in a marvellous stroll for the mighty Dacre.

Quintin are launching their new VIIIs Head to be held over the classic Isleworth to Club Course (Pink House / London Apprentice to the QBC FlagPole) This will be held under ARA rules with prizes for the winning crews. The race will be held on Sunday 4th February at 12:30 pm and should be a focus for the later Heads.