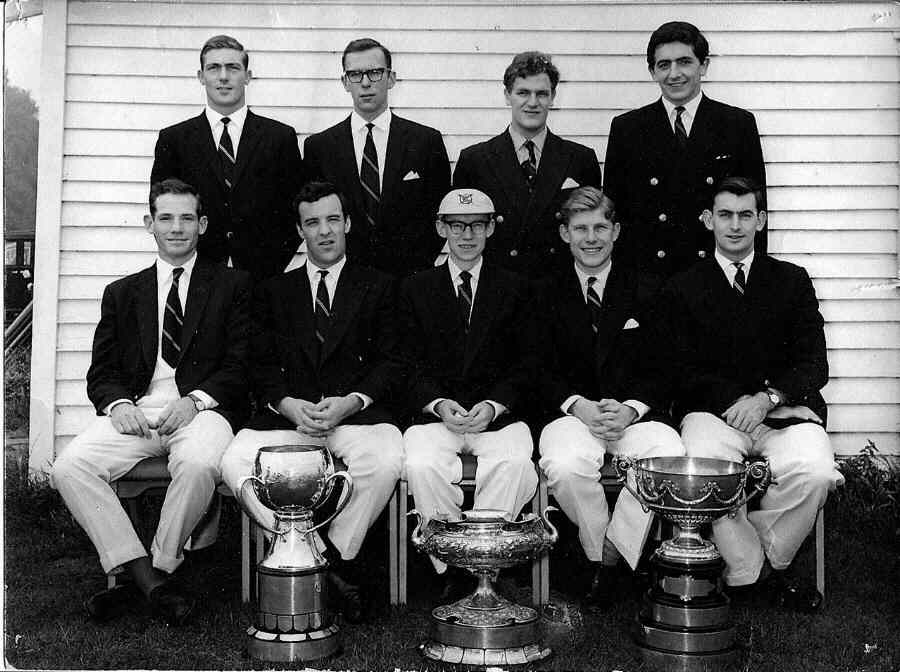 The major Thames regattas used to offer two events for Senior (what would now be Elite) VIIIs - Grand Eights and Thames Cup VIIIs, intended to correspond with the two events at Henley. In 1961 Quintin won Thames Cup VIIIs at Marlow, Molesey and Kingston - all premier regattas in their day, and can be seen here displaying their trophies (left to right: Marlow, Kingston, Molesey).

The crew at Marlow, according to the British Rowing Almanack, contained Ted Harris and John "Red" Williamson instead of Jon Whitmore and Bill Barry (although the rowing order was different, with Williamson rowing at 6. Ced Nowell recalls about the Marlow win, "1961 was the first Thames Cup that a QBC crew had won since 1936, I remember being told. The party that night at the Club was memorable. All the old members surfaced and bought us all pints". "Red" Williamson was called away to the Middle East on business shortly after Marlow, and so never got to represent the club at Henley. He was a dedicated oarsman and later took up residence at Auckland RC, New Zealand, where he coached school crews right up until the last. He suffered a stroke in 2007 but that did not stop him. He died in July 2009.