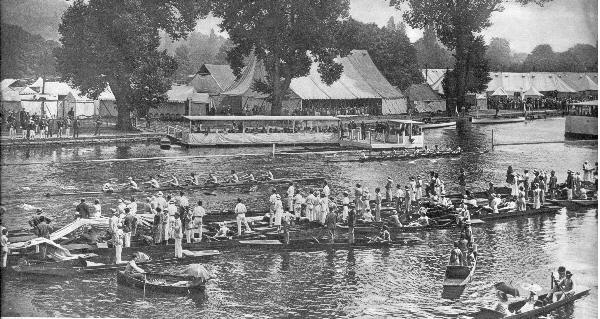 Quintin beating Princeton University by one length in the first round of the Thames Cup.

A framed version of this photograph was presented to the club by Teresa Hussey, Austin Hussey's widow. This includes a caption and text which suggest it was originally published in a newspaper or magazine. The caption was "THE FLAG FALLS: A THAMES CUP FINISH AT HENLEY ROYAL", and the text is as follows:

"Quintin appear to be well past the finishing post, and the flag in the judge's box behind them has already been lowered, but their cox has not yet given his welcome "easy all," as they are still sitting up to their oars and are about to come forward for another stroke. Princeton, one of the three American crews rowing in the Thames Cup, were remarkable for their high rate of striking. They rowed 43 in the first minute and never dropped below 38, a fast stroke for the Henley distance. The photograph gives an excellent impression of the canvas village erected for the four days of the regatta, including temporary boathouses, competitors' changing-rooms, refreshment tents, and even a post office."

It almost gives the appearance of a painting.