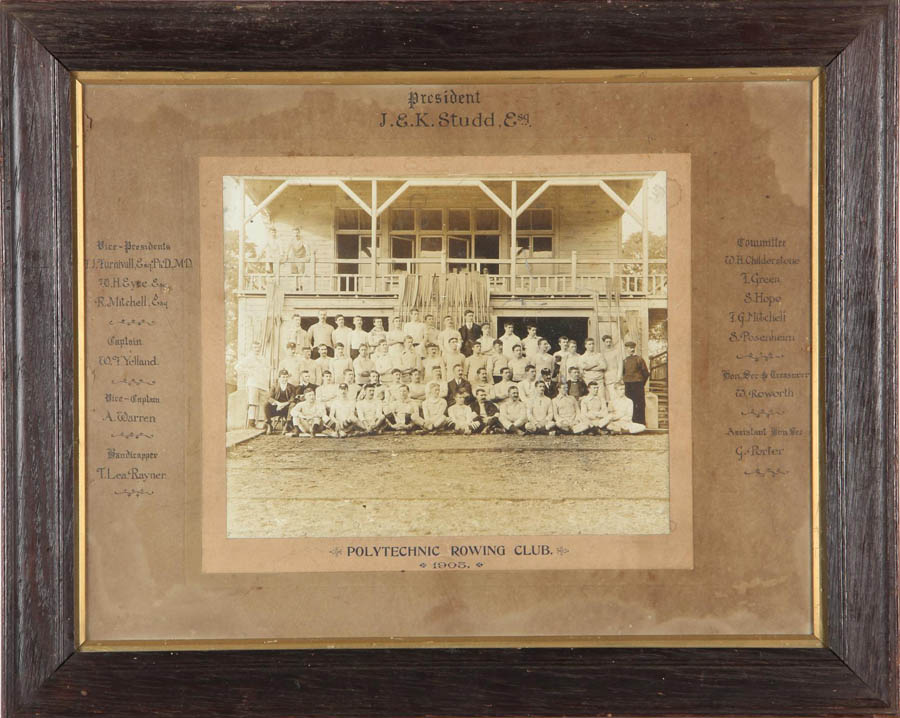 Malcolm Cook discovered this image of a framed photograph after it had come up for auction in the United States of America. It is a group photograph of the club members outside the boathouse and is captioned beneath, "Polytechnic Rowing Club 1905". Above the photograph is the caption, "President - J.E.K. Studd, Esq." The captions to the left read, "Vice-Presidents - F.J.Furnivall, Esq. Ph.D.M.D. - W.H.Eyre, Esq. - R. Mitchell, Esq. - Captain - W.F. Yelland - Vice-Captain - A. Warren - Handicapper - T. Lea Rayner". The captions to the right read, "Committee - W.H. Childerstone - F. Green - S. Hope - F.G. Mitchell - S. Posenheim - Hon. Sec. & Treasurer - W. Roworth - Assistant Hon. Sec. - G. Porter".

Vice-President F.J. Furnivall Esq. was the founder in 1896 of the Hammersmith Sculling Club, originally for working class girls and now named for him the Furnivall Sculling Club. He was also responsible for introducing in 1845 a new, narrow type of sculling boat with outriggers, revolutionising the sport. In his academic career he was one of the co-founders of the Oxford English Dictionary.

Take a closer look at the photograph.