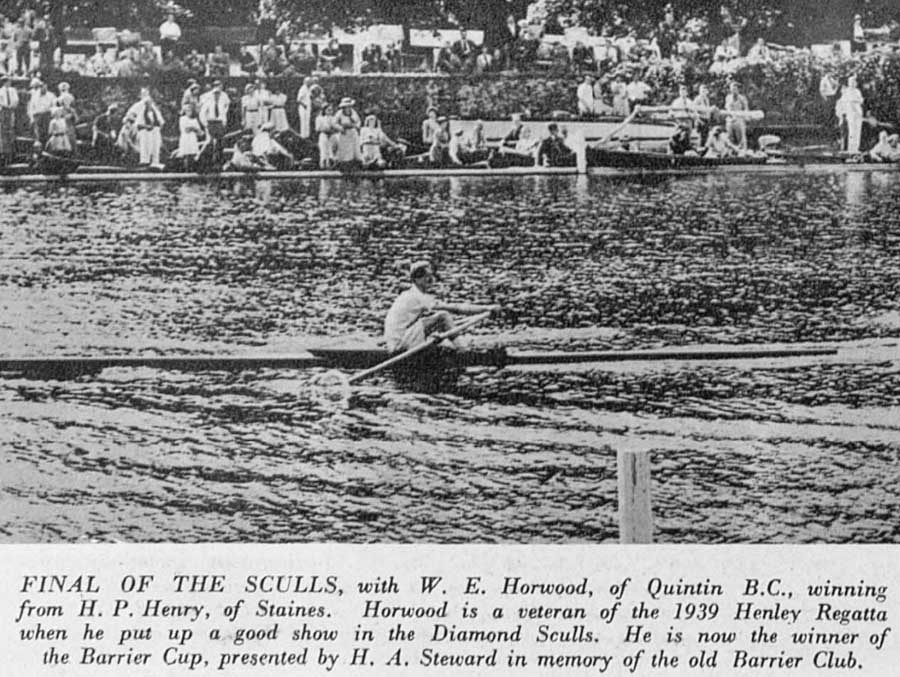 This newspaper cutting records Wally Horwood winning the Barrier Cup for Quintin. The course was from the Barrier to a point near the usual finish, allowing three crews to race abreast. There were six entries in this single sculling event and Wally beat HP Henry of Staines BC by three lengths in the final. Henry had beaten the American EF Woods in the semi-final.

An interesting quotation from the River and Rowing Museum website: ''Wally Horwood of Quintin BC took his Barrier Sculls trophy to South Africa when he emigrated in 1975. Accordingly he was contacted 14 years later and ask to return the trophy so that the Stonor display would be complete [an exhibition to mark the 150th anniversary of Henley Royal Regatta in 1989 - ed.]. “I believe he allowed its retention ‘on permanent loan’ and was given a lifelong honorary membership of the Leander Club as an acknowledgement of their gratitude” recalled Graham Horwood, Wally’s son, but, for whatever reason, the trophy now seems to have disappeared.''

The full River and Rowing Museum article on the 1945 regatta may be found at https://www.rrm.co.uk/news/75th-anniversary-of-henley-royal-regatta-1945-a-rather-different-regatta/.