"Click" a heading to expand/collapse its item.
Expand All Items  /  Collapse All Items

Weybridge Silver Sculls took place today in mixed weather of heavy downpours and sunny blue skies. The event was instigated in 1956 by W.J. "Dicky" Bird (Pauline Peel's father) and was the first single sculling head race on the upper Thames. To quote the race's own history: "Many famous scullers have won the trophy including Sir Steve Redgrave, Guy Pooley (four-times winner), Chris Baillieu, Dan Topolski and Tim Crooks." The race was opened up to double sculls and junior quads a few years ago and double sculls in particular now make up a large part of the entry. Our own Mike Ewing won the coveted Silver Sculls in 2014, 2019 and 2020. This year's winner was former Quintin member Ashley Cowley of Newark RC in a time of 13 min. 4 sec..

Quintin had two scullers taking part. Dov Ohrenstein took up Charles Harrison's entry at the last minute and sculled for time only in the Masters D 1x category. He completed the course in 14 min. 34 sec. Tom Bishop competed in two categories, sculling for Masters H in the morning and Masters G in the afternoon. He won the Masters H event in a time of 14 min. 56 sec, a minute and 18 seconds ahead of his closest rival, and he won the 'G' event in 15 min. 10 sec, 15 seconds ahead of the next fastest sculler.

The full results may be found at https://www.weybridgerowing.club/wss-results/2021.

The club has two scullers entered for the Weybridge Silver Sculls tomorrow. In division 2, starting at 11:30 am and with crew numbers 122 to 243, Charles Harrison (Masters G category) starts at number 219 and Tom Bishop (Masters H category) starts at number 222. Tom races again in division 4, starting at 3:30 pm and with crew numbers 361 to 461. He is in the Masters G category with a bib number 439.

The full start order may be found at https://www.weybridgerowing.club/wss-start-order.

It was announced yesterday afternoon that the Pairs Head has been cancelled due to expected bad weather.

The Pairs Head takes place this coming Saturday on a course from Chiswick Bridge to Harrods Wall, starting at 2:00 pm. The club has six entries as shown below with their starting numbers.

The club's annual sculling championship was held today on a course from the Pink House to the club, commencing at 10:15 am. The overall winner was Mark Chatwin and the winner of the sealed handicap was Mark O'Brien. Category prizes were awarded for Masters C-E and Masters F and above, the latter being won by Steve Aquilina. The Masters C-E prize was awarded to Ken Almand, who came third in the category behind Mark Chatwin and Mark O'Brien who were ineligible to win a second prize.

Full results of the race may be found at ../sculling/results.php?ref=2021.

The annual general meeting of the club was held at 12:00 noon. Minutes of the meeting will be published in due course, but highlights of the meeting included the re-election of John Peters as president of the club and the election of Fred Smallbone as a vice-president. Mark Chatwin was elected as Captain for the 2021-22 season in July. The remainder of the committee were elected today as follows:

Charles Harrison was competing at the Wallingford Long Distance Sculls today. He was entered in the Masters G single sculls category, for which there was one other entry. Charles completed the course in 19 min. 2.8 sec. whilst his opponent, Radosevic of Ardingly took 20 min. 9.2 sec. We await news on the awarding of pennants: conventionally Masters G would be merged with the one Masters H entry (Charles Parry of Wallingford) to award a Masters G/H pennant based on a handicap. If this proves to be the case, our Charles will be the victor as, even after handicapping, his time is a minute and a half quicker that that of Mr. Parry.

The club had eight entries in the Scullers Head last Saturday and seven of our scullers completed the course (Tom Solesbury scratched). Our fastest sculler was Dov Ohrenstein, who finished 128th overall in a time of 24 min. 37.07 esc. It was all very close between four of our masters with a spread of 15 seconds between Dov, Steve, Mark and Ken. Our resuts are shown below.

The full results may be found at https://drive.google.com/file/d/1_Y7xcO05oftD1eNiH0PKgn5FZs1eMLHc/view (pdf) or https://docs.google.com/spreadsheets/d/1Dr3c3rELUQH1Mft9o2tA_mtYDjGxEX6IKUmhPhDaFfc/edit#gid=1455646934 (Google sheet).

The second race in this series was held on this day. In contrast to two weeks ago, it was held on a warm summer's evening with flat water. The race was a tale of the two Marks, with Mark O’Brien posting the fastest time of the evening, closely followed home by Mark Chatwin (rating 22 – so he tells us). After allowing for handicaps MO'B was the winner with the Hine/Bramah pair in second place.

There is a short video (155 MB .mov) of the last part of the race you can download here. From foreground to background (at the start of the video): Graham Bagnall, Charles Harrison, Malcolm Cook, Mark Chatwin (to Malcolm's bowside), Andrew Bramah/Roger Hine pair. Mark O'Brien and Tom Bishop had already finished.

Our Thames Cup eight battled bravely in their first round heat on Wednesday, but were beaten by a more accomplished crew which progressed to the quarter-finals.

In the Diamond Sculls, Tom Solesbury was included in the draw after qualifying but then had to withdraw through injury.

Details of the Thames Cup crew may be found in our Henley Records together with a link to a video of their race.

The Henley draw was carried out this afternoon. Our Thames Cup eight have drawn the City of Bristol, a selected crew. In the Diamond Challenge Sculls Tom Solesbury has drawn SJ Devereux of Leander. 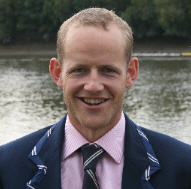